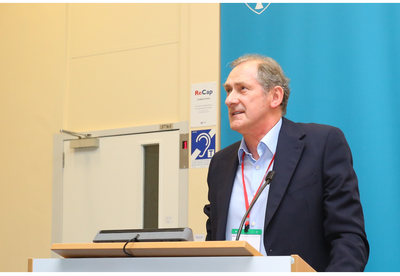 We are deeply saddened and shocked by the passing of our dear friend and colleague Keith Glaister. Keith was a hugely popular figure, liked equally by his academic and professional services colleagues, and the many students he taught over the course of an academic career spanning more than three decades.

He was conferred as a Fellow of the Academy of Social Sciences (FAcSS) in 2009 and served on the Chartered ABS Executive Committee (2011-2013). He was elected as Fellow of the British Academy of Management (FBAM) in 2011, and served on the Dean’s Group and on BAM Council for many years in both elected and co-opted capacities. He was Conference Chair for BAM2017. He was also a Member of the International Advisory Board of IESEG School of Management (Lille and Paris).

Keith began academic life at Bradford Management Centre, where Peter Buckley supervised his MBA dissertation - Keith was an economist at the West Yorkshire local authority and did “the evening MBA”. He was interested, diligent and capable and began a Ph.D. on the then cutting-edge subject of international joint ventures (IJVs). There was no available database, so Keith went through every single issue of the FT for a 10-year period examining announcements of IJVs to build a database. Somehow, this gargantuan task gave him the appetite for academic life, and he worked, first at Huddersfield, and then at Leeds, all the while publishing innovative articles in leading international business, international management and strategy journals. He was a first rate researcher – careful, meticulous and innovative. However, he never neglected teaching and always carried a heavy administrative burden. He was wonderful with students, especially doctoral candidates – and with junior faculty.

Keith had an uncanny ability to see straight to the heart of issues and then take pragmatic decisions with conviction, a characteristic that made him a highly effective academic and leader. He was a top researcher, a highly effective teacher, and a hugely successful Dean at Sheffield University Management School (where in addition to steering the School to triple accreditation, he oversaw a very successful RAE return), and prior to that he was a highly successful Pro-Dean for Learning and Teaching at Leeds.  We recall with fondness, how on the day his appointment to the latter role was announced at a School Board Meeting, Keith declared to all of his colleagues duly assembled that he was delighted to be taking on the role, not least because he knew exactly where they were all hiding, because he had been hiding there himself, for years, and he was coming after them, with his flash light, which was fully charged!

Keith had a hugely calming personality; rarely, did he display his emotions outwardly, and he was always solutions-focused.  He worked right until the end, still contacting colleagues about presentations and co-authored papers, submissions and the progress of his research students.  In short, he was a true “academic’s academic”.

Farewell old friend. We will miss you terribly.

If you are a BAM member you will need to reset your password so you can log in.